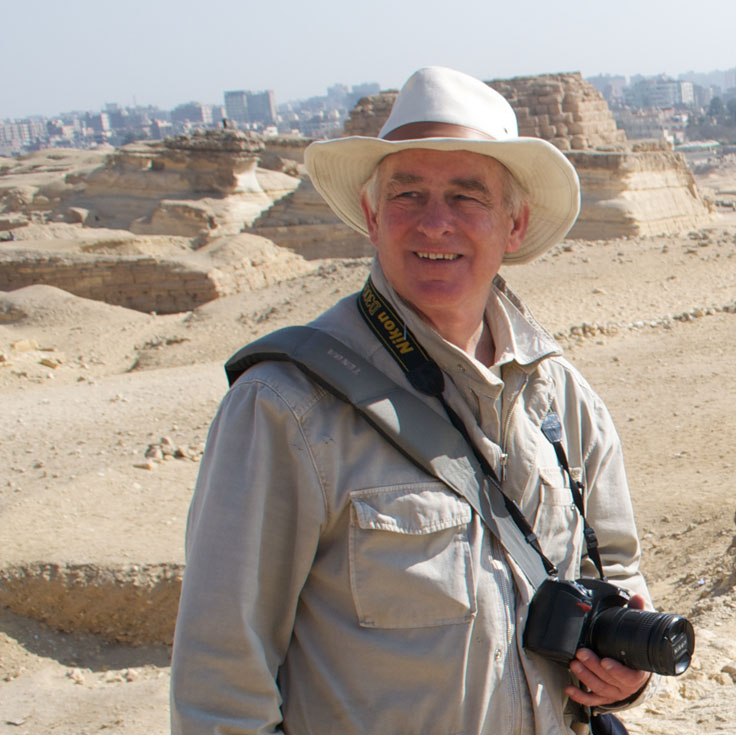 Mark Lehner is Director and President of Ancient Egypt Research Associates, Inc. (AERA).  He has carried out archaeological research in Egypt for nearly forty years. He mapped the Great Sphinx and discovered a major part of the ‘Lost City of the Pyramids’ at Giza.

Lehner directs the Giza Plateau Mapping Project (GPMP), which conducts annual excavations of Old Kingdom settlements near the Sphinx and Pyramids with an interdisciplinary and international team of archaeologists, geochronologists, botanists, and faunal specialists. From 1990-1995 Lehner was Assistant Professor of Egyptian Archaeology at the University of Chicago. He is now a Research Associate at the Oriental Institute of the University of Chicago and a Senior Fellow at the Capitol Archaeology Institute of George Washington University.

Lehner was born, raised, and began his college education in North Dakota.  He went to Cairo in 1973 as a Year Abroad Student at the American University in Cairo where he received his B.A. in Anthropology.  He lived in Egypt in for 13 years, working for American, Egyptian, British, French, and German archaeological projects.  From 1979 until 1983 he was the Field Director and then Director of the Sphinx Project sponsored by the American Research Center in Egypt.  In 1984 he began the Giza Plateau Mapping Project (GPMP), sponsored by ARCE and Yale University where Lehner received his PhD in Egyptology in 1990.  In 1985 he founded AERA with Matthew McCauley.

In 1988 the GPMP began to excavate in search of the settlement and infrastructure that supported the pyramid work force. In 1995 AERA assumed financial and administrative responsibility for the GPMP.  AERA’s interdisciplinary team has been discovering more of the Giza pyramid builders’ urban administrative center including workshops, storage buildings, bakeries, and barracks. In 2011 AERA became an NGO registered with the Egyptian government.

Since 2005 AERA has conducted archaeological field schools in Giza, Luxor and the site of ancient Memphis for the American Research Center in Egypt (ARCE) funded by USAID, the Charles Simonyi Fund for Arts and Sciences, and the Bill and Melinda Gates Foundation. AERA integrates its Beginners and Advanced Field School sessions with its GPMP excavations at Giza. AERA has directed two Salvage Archaeology Field Schools along Luxor’s Avenue of the Sphinxes.

Lehner has appeared on television in National Geographic's Explorer program, and on NOVA's Riddles of the Sphinx, and Secrets of Lost Empires series on ancient technology including This Old Pyramid and Obelisk. He is author of The Complete Pyramids published in 1997 by Thames and Hudson.  His work has appeared in articles in National Geographic, Smithsonian, Discover and Archaeology.